My dad died sometime in the late 1980s. We were close so this is one of those things I don’t think about often. Even with all of his many faults, I still admired him. We lived in Wyoming because that’s where he and my mom settled after his military stint during WWII.

He was a “parts man” like you might find at the local automotive store, but for heavy equipment instead of cars. When it was harvest season and a farmer had a broken combine, my dad got a phone call requesting repair parts. Likewise, when a road crew was paving a highway and their machinery quit, he was back at the office to get them a part so they could start working again. I “saw him in action” sometimes on the weekends. The phone would ring and he would stop whatever he was doing and go into the office. Some times he let me come along. While he was on the phone or boxing up parts, I would play on the various equipment that was on display or in the shop. Then we made a trip to either the bus or train depot to send the package on its way.

When my dad was hired for his last job (he was in his sixties), the new company put a announcement in the newspaper about how they had attracted the most well known and respected tractor parts man in the state. I admit that’s not a big deal in the realm of Corporate America. But this was about my dad and it described how so many people depended upon him for their livelihood.

I went to the funeral home to see him the day before his send-off. And for some reason, I had the urge to touch him. Why I did it, I have no logical reason. The sensation, though, was most unusual. It was as though the only thing inside his suit was a paper-thin shell. He –the dad I knew– wasn’t there anymore.

My wife and I had moved to Texas before his death. And we discovered a curious phenomenon. Unlike Wyoming, Texas has cicadas (often called locusts) that hatch from eggs underground as larva, live there as juveniles for 17 years and then crawl onto trees (or just about anything) and shed their skin. Then they fly into neighboring trees to mate and start the cycle all over again. 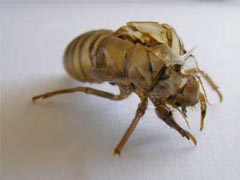 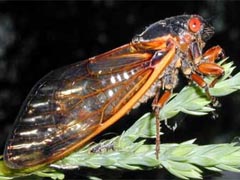 Those skins –or empty shells– have brought me an understanding of death because our lives are so much like those of the cicada. We are born into the silent darkness and live there all too long –thinking that the changes that we endure while going from babes to adults makes us complete –it’s all there is. But it’s not!

The cicadas’ final transformation enables them to live in trees, singing all day and into the night for everyone to hear. Not only do these little creatures look very different, they actually live a life that was never available to them before. Likewise, as new creations in Christ, we are able to travel to new heights that are way above our circumstances. And it’s where we can be praising God all day.

When the time comes for us to come up out of the ground –leaving this world and our empty shell behind– we will go into the presence of God. That will be a welcomed –or feared– Day of Judgment. Jesus is the light of men and He will be there making it light for all of us to see. He will base His Judgment on what we consider to be our “goodness” (which is filthy to Him); or we will be covered in His Son’s righteousness. Our choice determines if we will be with God or in the Lake of Fire.

I don’t know where my dad will spend eternity. He was a “good man”, but it takes more than that to enter God’s kingdom. Jesus is the way –the only way– for each and every one of us. I hope to see you there too!